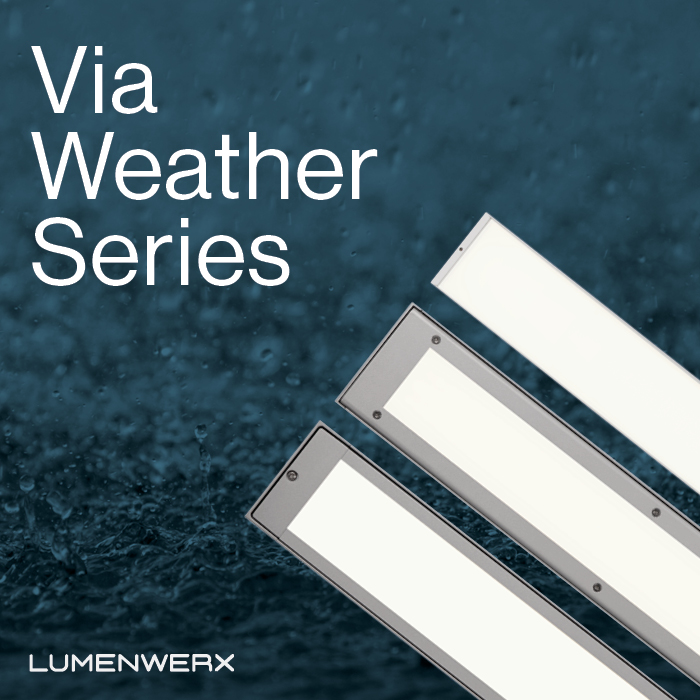 Introducing the Via Weather Series

Via Weather Series, including new Via Seal luminaire, proposes complete portfolio of robust luminaires capable of handling the elements

Lumenwerx is pleased to launch the Via Weather Series, a new subgrouping composed of existing Via Wet (IP54), and Via Splash (IP66) lines, along with the all-new Via Seal (IP44 & IP54) fixture, which maintains the elegant architectural esthetic and flexible control options of our classic Via luminaires, while offering added protection against the elements of nature. With our Environmentally Protected Optics (EPDO, EPIO), Via Seal blocks dust and moisture, resists UV distortion, and withstands moderate impact.

Via Seal complements and furthers our existing Via offering of luminaires suitable for wet environments, namely, Via Wet (IP54), which can be used in demanding environments, and the IP66-Rated Via Splash, engineered for harsh environments. Both Via Wet and Via Splash feature a double-lens design as well as the intelligently crafted Smart-Lock Module, which encloses the lensing and electrical components as a discrete unit that can be taken out for maintenance without having to remove the luminaire.

For more details, consult the online Via Weather Series brochure.